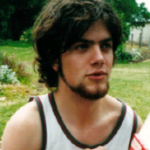 MISSING: Ryan had been in India for around 6 weeks travelling with a friend John, when he disappeared on the morning of 24 August, 2005 from the Sri Ved Niketan Ashram in Rishikesh, Northern India, where he was staying. Ryan and his friend experienced some culture shock when they arrived in India, their original intention was to spend 8 months there. Before Ryan went missing he had been enjoying the charm of Rishikesh for a few days and had attended some yoga sessions at the Ashram and visited some tourist spots nearby. On the evening of 23 August 2005 Ryan rang home to Australia and said he was was ready to come home as he had seen everything he wanted. His friend John offered to help him book flights at the travel agency but Ryan had changed his mind by then. Ryan was restless that night and early the next morning he left the Ashram where he was staying when the security gate was opened. He was wearing only shorts. Ryan left his belongings, cash, phone, passport and has not been heard from since. Ryan was 21 went he went missing he would now be 32. If you think you have seen Ryan, please contact the Australian High Commission, New Delhi Ph:001-5139 9900 or the Laxman Jhula Police Station, Rishikesh Janpad Pauri Ph: 0135-243 0228 or Jock Chambers on Ph: +61 419 725 818